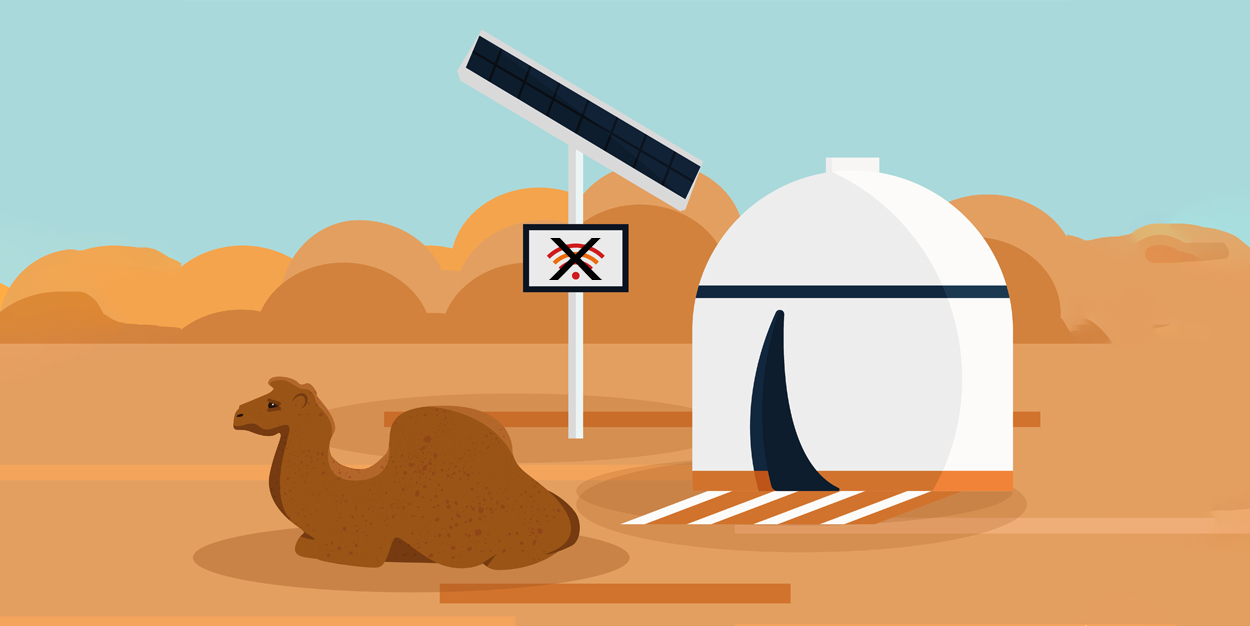 High-Speed Internet is constantly evolving. What was once cutting-edge speeds have now gone the way of all dinosaur technology. Newer technology gives businesses the highest speeds and the most reliable connections. But integrating the new solutions with your business’s infrastructure can be tricky.

One of our clients wanted faster Internet speeds to handle synchronous off-site backups and other cloud processes for three separate locations. One of their locations is in the middle of a desert. Another is in a small rural town and the last is close to a large city. Their Internet Service Provider (ISP) was a global media and technology company. They had been providing them with Broadband Internet services with maximum speeds of 150 Mbps. A few years ago these speeds were at the high end but with advancements in Broadband and Fiber Optic cabling technology, it’s now possible to get up to 1,000 to 2,000 Mbps. There are even some companies offering, on a very limited basis, up to 10,000 Mbps and more (Fastest Internet Providers 2021).

The ISP promised they could provide Fiber Optic Internet to all three of our client’s locations. They also included in the plan the promise of:

Problems With Setting Up High-Speed Internet

There were many problems with these proposed solutions, but our client didn’t spot them right away because they are not IT professionals. The first was bringing Fiber Optic Internet to a location in the middle of the desert. It’s starting to become more widely available but it is not yet available in such remote locations.

Additionally, their ISP’s progress in implementing any of their solutions was incredibly slow. They were unresponsive and their project management was nonexistent. Eighteen months into the project, they told our client that they couldn’t do many of the things they had promised:

Discovering that many of the solutions the ISP had proposed were not attainable, I worked with them and our client to develop customized and cost-effection solutions that were.

Because it was impossible to get Fiber Optic Internet in the middle of the desert, I came up with a viable solution that would speed up their Internet. I upgraded their satellite Internet to faster speeds. I also discontinued their DSL connections which were costing the company an exorbitant $3K a month.

Additionally, their satellite Internet provider has its dishes on top of a couple of local mountains. A hawk made its nest on one of the dishes. Because the hawk is a protected bird, moving the nest was out of the question. It took two weeks for the provider to install another dish up there. Meanwhile, our client’s Internet was incredibly sluggish.

Consequently, I consulted with our client about backup Internet solutions for future protection. We ended up deciding to pre-order Elon Musk’s Starlink Satellite Internet. Elon Musk has been launching Starlink satellites for the last 3 years with his company SpaceX. They have nearly 1,500 satellites in orbit. It’s just starting to go live this year (SpaceX continues Starlink deployment with latest launch).

Fiber Optic Internet was available through our client’s global ISP for their city location. I worked with them to get it set up, which was time-consuming because they were slow to respond. But now that it is up and running, our client enjoys speeds of up to 1 Gbps. There was also Fiber available in the small town but through a local provider. Instead of paying higher fees to their global ISP to piggyback on the local provider, we were able to acquire Fiber Internet directly from the local provider at a significantly lower cost.

I brought in our VoIP provider who we partner with. They came in and installed everything needed in a timely manner. I also worked with our client to consolidate various redundant services. Discovering that certain lines, connections, and services were not even needed, I advised them on what was needed and what wasn’t. These efforts resulted in a savings of roughly $1K in their monthly bills.

In regard to the backup Internet solution, I worked with their accounting department to evaluate the plethora of bills and communications from their ISP. I unearthed some costly duplicate charges. Our client had been receiving five different monthly bills, each with a different account number. These totaled over $6K a month!

I then navigated a consolidated solution, which reduced their number of bills to only two. Their total monthly cost was reduced from $6K to $2K. On top of that, they had been paying over $3K a month in duplicate Internet charges. And for that, I negotiated a refund of over $13K for the backup Internet services that should have been discontinued sooner.

In order to manage major projects like acquiring High-Speed Internet, it is much more cost-effective and time-saving to hire an IT Managed Services company that assigns your business a team of service engineers. These service engineers should oversee your entire infrastructure. They should understand the ins and outs of computer networks in general. And they should personally come to know the uniqueness of your specific network and how everything works together. It is not wise to leave the management of it up to an ISP or any other vendor because the software and hardware of various vendors are interwoven and interdependent on each other. They also may not be aware of your locations and specific limitations.

It has been a pleasure to become part of our client’s team. I have seriously enjoyed the opportunity to use my experience and education in computer technology to bring solutions that saved them time and money. Even though they have to pay for our IT Services (which, by the way, ends up being much less than hiring in-house IT staff), they ended up saving more than $24K with the elimination or consolidation of redundant and unnecessary charges, equipment, and services. And not only did they save that much money, but they also have much faster Internet connections at all of their locations and a more streamlined, secure system to boot.

This author does not have any more posts.